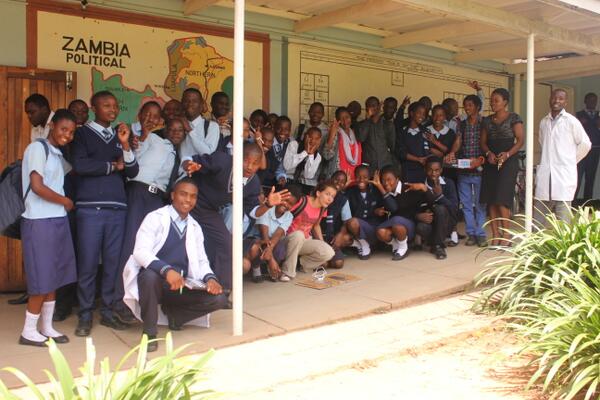 On Sunday 23rd February 2014 BongoHive was pleased to receive Stefania Druga from the Afrimakers project, she is also the founder of HackiDemia (a global network that designs workshops and kits enabling kids to use curiosity, play, and empathy to solve global challenges.).

Stefania arrived in Lusaka, Zambia to assist with the delivery of a series Afrimaker workshops. Afrimakers wanted to kickstart maker workshops focused on local challenges in 10 hubs around Africa who asked her to go and train them to work with young people (Kenya, Tanzania, South Africa, Zambia, Ghana, Nigeria, Egypt, and more).

The Afrimakers workshops ran from 24th February till Saturday 1st March 2014. As hosts BongoHive provided the space for mentors to be trained throughout the week by Stefania. Mentors were trained to assist with spreading latest technologies among 7 – 16 year olds in Zambia and ِAfrica. The training workshops covered Arduino & Raspberry Pi programming as well as some electronics basics.

BongoHive received a HacKidemia maker box of tools and the mentors were able to organize and to run hands-on workshops with the students.

The Maker boxes consisted of:

  a Soldering kit useful for upcycling and building electronics

Mentors also went to UNZA School of Engineering to showcase the Afrimakers project and the Maker box kit.

On the evening of the 27th of March, we hosted the Lusaka Makers Unite with short talks from local makers, artists, craftsmen and entrepreneurs presenting what “making“ meaning to them. We had Gilbert Sibajena who is an application developer and a Raspberry pi enthusiast. Gilbert gave a talk about how he built his SmartBox to control his TV, Fan and lights using a smartphone. We also heard from the Regional coordinator of JETS Clubs in Lusaka, Mr Moonga.  Mr Moonga gave a talk and defined the role of JETS (Junior Engineering Techinician And Scientist) which aims to give the youth an opportunity to learn and apply scientific principles. Stefania was our last speaker for the day, she gave a short presentation on making. In her presentation she defined making as an art, tradition and imaginations, also that making is problem solving. She advised the audience that “the most powerful thing about making with kids, is adapting to them and asking them questions”.

Afrimakers Zambia were supposed to end their week with a Maker fair at the University of Zambia, School of engineering where they were to give hands on workshops on technology  and science as well as showcase their project that they worked on during the training. Unfortunately the Maker fair event had to be postponed due to unforeseeable circumstances.