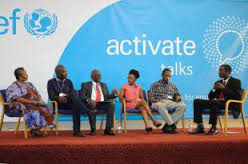 What do Bongohive and UNICEF have in common? One word: Innovation. Almost 25 years ago, the Convention on the Rights of the Child (CRC) made a promise that they would do everything to protect and promote children’s rights. Since then there have been some victories and some challenges. New problems have cropped up in the process and to deal with those will require new ways of thinking and doing things. Having realised this, UNICEF declared 2014 the Year of Innovation for Equity. During this year UNICEF will hold a series of Activate talks gathering various new thinkers and change agents from all aspects of life to reassess and come up with ways of delivering results for all children. Activate Talks was held last Monday by UNICEF in partnership with BongoHive, Lusaka’s Innovation Hub.

The event brought together people from all walks and disciplines. It was officially opened by Hon. Yamfwa Mukanga, the minister of Transport, Works, Supply and Communication. He highlighted some programmes that the government of Zambia has embarked on to facilitate and encourage innovation.  He mentioned that Institutions, such as the Citizen’s Economic Empowerment Commission, had been established to provide funding and technical assistance to foster benefits of the people. An interesting and promising piece of information he let out was that Zambia Information and Communication Technology Authority (ZICTA), was installing additional communication towers in 169 chiefdoms across the country.

The first speaker, Emmanuel Chibesakunda, is pioneering a project called “Building the Future: Africa”. The project aims to create a low cost sustainable school design with improved classroom conditions. He pointed out that the common view of Africa was that of war, poverty, drought and disease but that is just what has been magnified by reports. A closer look reveals that Africa is a land of capital, investment, talent, creativity, diversity and opportunity. He noticed that the current infrastructure of some Zambian schools is not conducive for learning thus the project to build new low cost infrastructure. To ensure the low cost, local material is being used and soil is being used in the bricks instead of cement. Operations on the classrooms commenced in March 2014.

The next speaker was Ethel Ella Mbewe, a co-founder of Asikana Network. She is one of the developers of WRAPP, a women’s rights application that inform Zambians of women’s right and what steps to take when violated.

The next pair of Speakers, Brighton Mukuka Kaoma and Josephine Namakau Pumulo, talked about their project “Zambia U-Report”. This is an SMS-based tool aiming to empower young people with knowledge by connecting them to counsellors who respond to questions in a confidential and personal manner. The service is available 24 hours a day and the counsellors are trained in HIV/AIDS and Sexual Reproductive Health. They mentioned that more 61 thousand young people have since signed up on U-Report.

The last speaker was Mark Bennet, the founder of AfriConnect which was sold to Vodacom in 2012. He now runs iSchool which has created a tablet computer that covers the whole primary school curriculum for Zambia. Zambian primary education has not been satisfactory in the past years; this is due to large class sizes, poor literacy rote learning and few textbooks. iSchool proposes a solution to these problems; e-learning. The ZedUPad aids both teachers and pupils by providing detailed lesson plans and interactive local contextualised audio/visual material for students.

After the last speaker, there was a panel discussion that rounded up some of the innovators and thought leaders. It was moderated by Lukonga Lindunda, the co-founder and Executive Director of Bongohive. The panellists included Dr Patrick Nkanza, permanent secretary in the Ministry of Education, Science, Vocational training and Early Education, Francis Mpolokoso, a systems engineer from Google, Dr Lula Mariano from UNICEF, Simunza Muyangana, co-founder and director of Digital ICE Interactive, and Chisenga Muyoya, co-founder of Asikana Network. After the discussion, the event was concluded and deemed a success and guests were led tococktail that served as a networking event.

Chipo Chitambi-Mando is a blogger and freelance writer who covers events, concerts and anything remotely appealing to her curiosity. She is a social media apprentice and live tweeter. She has a humour blog at www.autumneyez.com and speaks her mind on twitter @chipoautumn.