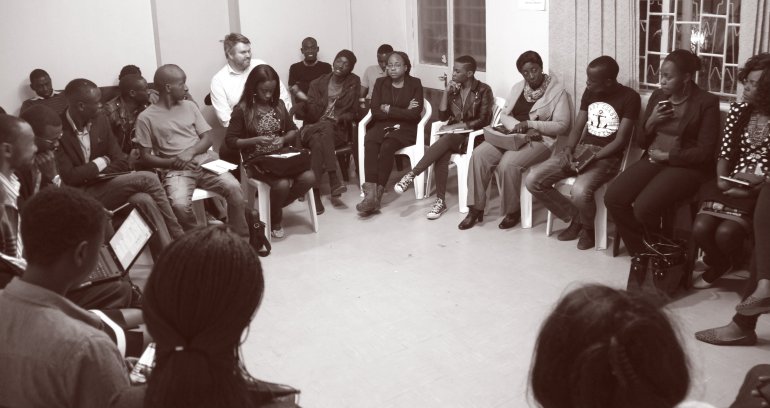 The very first WordPress Lusaka Meetup was held yesterday at BongoHive. Aspiring bloggers sat together with veteran bloggers and shared their experiences with the content management system (CMS) called WordPress. Blogspot also popped in the conversation here and there, it seems nobody really uses it.

For its first time being hosted, the WordPress Lusaka Meetup was pretty successful. Success, in this case, is being measured by the number of people who showed up plus the number of people who contributed to the discussion. The discussion, I must say was very candid with some people making certain confessions which shall remain secret in the article. You had to be there to understand or show up for the next one.

Anyway, the topics of discussion ranged from personal bloggers, company bloggers and newbie bloggers perceptions about blogging. The gist certainly got interesting when the million dollar question was raised. Who then is making money from blogging in Zambia?

Nobody yet is making money from their personal or business blog as it turned out. However, there are some pretty lucrative side gigs that a blogger can engage in to make that elusive cash money. According to Mazuba Kapambwe, also known as, Afrosocialite on social media, “some South African firms are on the prowl for Zambian bloggers and will act as their agent on a commission basis.”

Martha who works for an advertising agency but came in her own capacity as a fashion blogger with a tendency to share “abstract” poetry online, said, “it is difficult to identify Zambian bloggers because they are mostly under the radar.”

Obviously, the elephant in the room was inconsistency. There just isn’t enough content being churned out to create a vibrant Zambian blogging community. So hopefully, the WordPress Lusaka Meetup will create the much needed network.

Enough about the CMS users, the topic of discussion shifted to the developer’s end. I must say that it was great to hear their side of the story. Developers rock, right? As luck would have it, the event was hosted by a developer in every sense, Mr. Silumesii Maboshe. I kid, it was all planned, luck had nothing to do with it!

Another developer in the audience by the name of Jeremiah shared his “ethical” yet none so ethical practice with blogs, websites and social media. Nonetheless, he provided much needed comic relief for the audience as we all gawked at his comments. Once again you should have been there because I can’t spill the beans.

The next WordPress Lusaka Meetup is slated for next month on a date that is yet to be announced. I have to say though that we are already pretty excited for it and can’t wait.

You can catch up on what you missed by visiting Twitter and searching #WordPressLsk for the timeline of live-tweets from yesterday’s event.

Imanga Kay is a tech enthusiast and a writer at Manic, an information blog focusing on covering technology, sports, health, and society news in Zambia and the surrounding region.